Being a nominee for "Best Album" at the Utah Music Awards was exciting to say the least! But I didn’t realize until I attended the Awards Ceremony just how truly exciting it was! 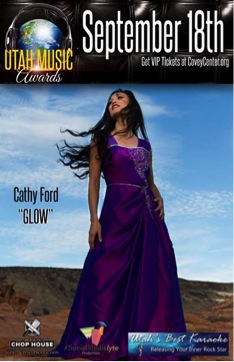 So when Ben and I showed up at the Utah Music Awards, I had no idea who any of the other artists were, what their styles were, or their history in the business. Boy, did I have an eye-opening experience! Several of the artists had been invited to perform at the Awards, so I was able to get a clear picture of the competition by the end of the ceremony.

And I was floored.

These other bands and artists were amazing. All of them were very experienced, long-standing artists in the Utah music scene. Many of them had several albums and had been performing for years. And then there was me. The goofy housewife from Saint George with 8 kids. I just remember thinking repeatedly throughout the night, “How did I get here?” And then I giggled. A lot. It was absolutely surreal. Of course, the final award of the night, the clincher of the evening, was the award for Best Album. At that moment, just as they were getting ready to announce the winner of the evening, I had an epiphany.

Just the fact that I was there, dressed in my beautiful gown, as a nominee for the highest, most coveted award, the award artists strive for, with my first album of my first twelve songs … well, that said something to me. I am legitimate. As strange as that thought is to me, as arrogant as it makes me feel I am being to even admit thinking it, I realized that I am a real, legitimate artist.

And since last Thursday night, many tears of gratitude have been shed. Thank you to everyone who believed in me and my work, even when I couldn’t see it myself. I never would have attempted to do any of this without your love and encouragement. You know who you are.